The Georgia College Alumni Association was established in 1892 and incorporated in 1972.

The association has three main goals:

Who is a member:

Membership in the association is automatic upon graduation and entitles alumni to all services and privileges offered, including eligibility for membership on the Alumni Association Board of Directors. Alumni are encouraged to keep the Alumni office apprised of their current address, occupational status, vital statistics and life additions.  You may update your current address on the Alumni Overview web page and click the blue bar that says "Update Your Contact Info."

Georgia College opens the Wellness and Recreation Center on the West Campus, a $26 million state-of-the-art facility that receives a designation for its environmentally friendly architecture and accoutrements.

The Campus Theatre reopens after extensive restoration and renovation to become the home for the Georgia College Department of Theatre Arts and a “black box theatre” as well as the university bookstore and coffee shop.

The USG Board of Regents approves the Macon Center for Graduate and Professional Learning for operation in downtown Macon by Georgia College.

Renovation of the former First Methodist Church as the new Student Activities Center is completed. The Magnolia Room centerpiece provides an elegant space for events and gatherings.

With help from the Georgia General Assembly and the Woodruff Foundation, a painstaking restoration of the Old Governor's Mansion is completed as a historic house museum, interpreted in the years 1851-1853.

The Georgia Board of Regents officially charges the institution with its new mission as "Georgia's public liberal arts university" and bestows the sixth name -- Georgia College & State University.

The 100th anniversary of the College is marked with the opening of the Centennial Center, which serves as a wellness center and gymnasium.

An educational exchange is established with the People's Republic of China. This begins, in part, a revival of international interaction through study abroad and exchange programs.

The Woman's College of Georgia becomes coeducational and receives a new name, Georgia College at Milledgeville. In the fall, 185 men join the campus of 1,216 women.

Funds are appropriated for the first adequate renovation of the Governor's Mansion. The work is completed in 1967.

Georgia State College for Women is officially renamed The Woman's College of Georgia.

The college begins its first graduate program, a Master of Education degree.

Enrollment sinks to a low of 585 as the majority of post-War women prefer coeducational colleges.

GSCW is selected as one of four colleges for training U.S. Navy WAVES. For two years, 15,000 women receive training on campus in storekeeping and clerical duties for the Navy.

Mary Flannery O'Connor enters as a freshman. Active in student publications, she graduates three years later and becomes one of the South’s most noted writers.

The number of enrolled students, known as Jessies from the sound of GCSW, peaks at 1,500.

In order to boost student morale, Dean of Women Ethel Adams initiates a spirited theatrical competition between freshmen and sophomores that becomes known as "Golden Slipper." This competition endures as one of the College's most popular traditions until the 1970s.

Due to President Parks' persistent advocacy, the college receives authority to grant four-year degrees and establishes its clear independence from the University of Georgia.

J. Harris Chappell, the first president, steps down due to illness, and Marvin M. Parks assumes the leadership.

Classes begin in the newly constructed Main building (lost to fire in 1924), with students housed in the Old Governor's Mansion. The main campus is primarily located on "Penitentiary Square," the site of the former Georgia State Penitentiary (1818-1879). In all, the campus totals 22 acres.

Due to the lobbying efforts of Julia Flisch, a journalist in Augusta, support builds to establish a publicly funded college for women that would prepare them for the demands of the new industrial age. In 1889, the Georgia Normal & Industrial College is chartered as a two-year college emphasizing teacher training and business skills. 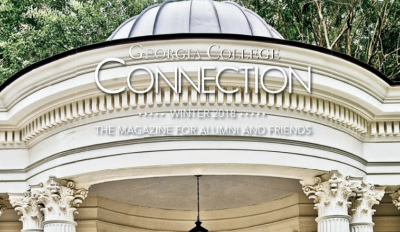