Six alumni and friends received recognition for achievements in their profession, field or society.

These inductees are widely regarded and respected for professional and personal success and actively involved in field of work or philanthropic endeavors.

The foundation was established in 1960 to receive, manage and administer private gifts in support of the Georgia College & State University mission and priorities.

The following professionals were inducted in to the GCSU Foundation’s 2012 Academy of Distinguished Alumni and Friends:

Max Crook worked in the field of finance for 40 years. He recently retired from Morgan Keegan & Co. in Macon as a financial adviser. In the Middle Georgia community, Crook has been extensively involved with the Macon Civic Club, Wesleyan College and Museum of Aviation at Robins Air Force Base. Crook chaired the foundation from 1996 to 1997, leading efforts to keep the Old Governor’s Mansion as part of the campus. Crook received the William Bone Golden Key Award in honor of alumnus William Thomas Bone in 2010. The award is reserved to honor friends of Georgia College who have rendered outstanding service to both the university and community.

Mike Garrett spent 40 years with Southern Co. He served as president and CEO of Georgia Power, Southern Co.’s largest subsidiary. Garrett earned his bachelor’s degree in business administration from Georgia College in 1976. He and his wife, Karen, have devoted themselves to a number of endeavors, including Georgia 4-H. Garrett also has chaired campaigns for the Georgia Chamber of Commerce, Woodruff Arts Center and United Way of Metropolitan Atlanta. During 2004, he received Georgia College’s Executive of the Year Award from the J. Whitney Bunting College of Business. During 2009, Georgia Trend Magazine named Garrett its “Most Respected Business Leader.”

Alex Gregory received his Master of Business Administration and Master of Science Administration from Georgia College. He currently serves as the chair, CEO and president of Marietta-based YKK Corporation of America. Gregory oversees 13 companies located in North and Central America, the West Indies and Colombia. He served as a member of the foundation Board of Trustees for more than 20 years, twice serving as chair. Gregory is also a longtime supporter and mentor to students participating in the university’s Georgia Education Mentorship Program known as GEM. During 2001, he received the Georgia College Alumni Achievement Award, and during 2002, he was honored as Georgia College’s Executive of the Year, presented by the J. Whitney Bunting College of Business.

Sherrilyn Kenyon, a science fiction and fantasy writer, says her creative writing professors at Georgia College encouraged her success. While studying in the library, Kenyon often wondered what it would be like to have her writing published like the school’s influential and revered graduate, Flannery O’Connor.  Sixty books and 25 million copies later, Kenyon is an international sensation. Best known for her “Dark-Hunter” series, Kenyon’s books have reached the top of best-seller lists in the New York Times, Publishers Weekly and USA Today.  In the past three years alone, her work has reached the top of the Times list 16 times. She cites Georgia College as an integral part of her life and career. During 2012, she received the Georgia College Alumni Achievement Award.

Dave Perkins, a renowned guitarist and music producer, has worked with a legion of legendary artists, including Ray Charles, Carole King and Willie Nelson. He received his Bachelor of Arts degree from Georgia College in 1971, majoring in history.  After 25 years on the road and in the studio as a musician, Perkins’ earned a Master of Divinity degree and a doctorate from Vanderbilt University. Perkins currently serves as Vanderbilt’s associate director of the Religion in the Arts and Contemporary Culture program. He has also released a critically acclaimed blues-rock album, “Pistol City Holiness,” and he has written the score and performed all the music for the 2012 feature film, “Deadline.”

Jackie Ward is considered one of the nation’s most respected and admired executives as well as a trailblazer for women in business. She earned undergraduate degrees in psychology and mathematics from Georgia College. Ward co-founded the data technology company Computer Generation Inc. in 1968, at a time when few women were starting their own businesses particularly in the field of technology. Ward became the first woman to lead the Metro Atlanta Chamber of Commerce, and she was the first woman to receive the Entrepreneur of the Year Award from her fellow Atlanta 100 CEOs. She currently serves on the board of directors of Flowers Foods, Wellpoint Inc., Sysco Corp. and Sanmina-SCI Corp.

The Academy of Distinguished Alumni and Friends is intended for alumni and friends of Georgia College who have distinguished themselves through significant achievements in their profession, field or society at large.

• Brings distinction to Georgia College through association with the university
• Widely regarded and respected for professional and personal success
• Actively involved in field of work or philanthropic endeavors at the time of nomination
• Highly placed in industry, academia or government, including, but not limited to, attorneys, bankers, CEOs and COOs, consultants, university presidents and physicians
• Forty years or older at the time of nomination deadline
• Current trustees not eligible

Nominations are accepted from current and former Georgia College Foundation Trustees and members of the Academy. No more than ten (10) nominees are selected for the Academy each year.
The applications are reviewed by the Academy Committee. This committee is chaired by the Trustee Development Committee chair. The members include the trustees serving on the Trustee Development Committee and the past-chair and vice chair of the Foundation. The induction ceremony is held each year during the fall.

The annual ceremony is held in Atlanta to encourage friends and families of inductees to attend, as well as former inductees and alumni. 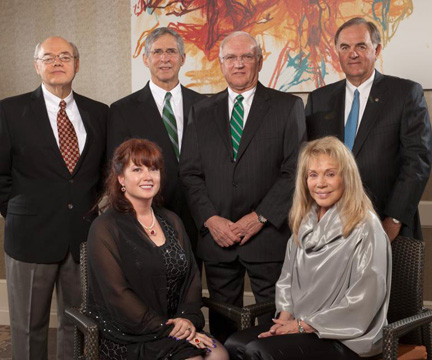