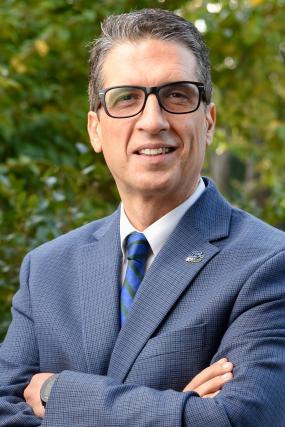 Dr. Costas Spirou serves as Provost and Vice President for Academic Affairs. Previously, he was Senior Associate Provost for Academic Affairs and Director of The Graduate School. In 2017, Spirou was named a Fellow by the American Council of Education (ACE), the nation’s premier higher education leadership development program and spent the 2017-2018 academic year at Georgia Institute of Technology (Office of the Provost). He has held academic appointments at numerous universities including as a Visiting Fellow at the Institute of Latino Studies of the University of Notre Dame (2009-2011) and a Research Fellow at the Center of Cultural Understanding and Change of the Field Museum in Chicago (2005-2010). He also holds a faculty position as a Professor of Sociology and Public Administration.  Past appointments include faculty positions at DePaul University, National Louis University, and the University of Illinois at Chicago.

His research interests and scholarship center on public policy and leadership, technology and political sociology, urban affairs and governance. He has also written about downtown revival, the politics of stadiums and convention centers, and urban tourism and sustainability.  Spirou’s most recent books include Anchoring Innovation Districts: The Entrepreneurial University and Urban Change (Johns Hopkins University Press, 2021) which focuses on innovation, higher education, economic development, and urban revitalization (see Times Higher Education op-ed) and the co-edited The Many Futures of Work: Rethinking Expectations and Breaking Molds (Temple University Press, 2021) that examines the technological, political, and economic sources of the gig economy, the impact of the rapidly changing labor economy, and ameliorative policy options. He is editor of the Johns Hopkins University Press Higher Education and the City book series.

Previous books include Building the City of Spectacle: Mayor Richard M. Daley and the Remaking of Chicago (with D. Judd) published by Cornell University Press in 2016, Urban Tourism and Urban Change: Cities in a Global Economy (Routledge, 2011), St. Charles: Culture and Leisure in an All-American Town (Arcadia, 2005) which received an Award of Merit by the Illinois Association of Museums, and It’s Hardly Sportin’: Stadiums, Neighborhoods and the New Chicago (Northern Illinois University Press, 2003, with L. Bennett).  He has published numerous articles and chapters in academic journals and edited volumes and his activities have received support from the National Endowment for the Humanities, the Spencer Foundation, the Library of Congress, the Ford Foundation and the Sam Walton Foundation. He has worked on projects with the University of Athens, Hassan II University Morocco, the University of Heidelberg, and Peking University.