Click here for more information on our Covid-19 guidelines and procedures. All updates will be posted on our social media channels as well.. 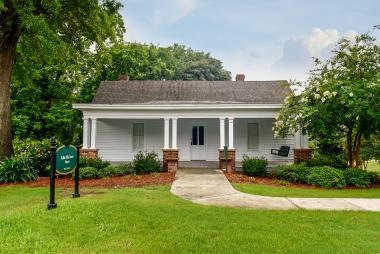 The Sallie Ellis Davis House was the home of a dedicated and passionate Baldwin County educator. Ms. Davis worked her entire career as a teacher and principal at the Eddy School to touch the lives of Baldwin County children. She believed that through a combination of hard work and education one could accomplish anything. Ms. Davis was an inspiration and a pillar of the African American community in segregated Milledgeville. Her legacy, preserved in her home, is one of excellence. She encouraged her students to excel in all they did and to “reach for the stars” no matter what obstacles lay before them. Since April 2012 her home is available for historic tours that celebrate the life and times of Sallie Ellis Davis. The Sallie Ellis Davis House is a meeting place for the community of Baldwin County and greater Georgia.