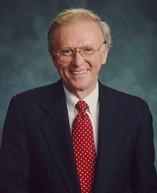 An affiliation between Paul D. Coverdell and GC began in the latter half of 1990 when former GC president, Dr. Edwin G. Speir, signed an agreement to begin the Peace Corps Fellows/USA Program at Georgia College. Coverdell later signed a gift agreement at Georgia College & State University in the fall of 1996, donating his Peace Corps papers to Ina Dillard Russell Library.

The establishment of the Paul D. Coverdell Endowed Chair in Policy Studies was announced by President Dorothy Leland in her Convocation Address in September 2008. Dr. Roger Coate, Professor of Political Science and Public Administration, was chosen as the first Coverdell Chair, arriving at Georgia College in 2009 after a long and distinguished career at the University of South Carolina. Dr. Coate served as Coverdell Chair for a decade, bringing many speakers to campus from around the globe to address public policy issues. In 2019, the Coverdell position became the Paul D. Coverdell Visiting Scholar program.

The Chair has been charged with the responsibility of  being the focal point for the university’s multifaceted initiatives in public policy studies and bringing faculty and students from various disciplines together in analyzing the various dimensions of major public problems. The Coverdell Chair works closely with the Dean of the College of Arts and Sciences to bring to Georgia College courses and programming in the area of public policy that embody the values and high standards for which Senator Coverdell tirelessly strove.

The Coverdell Visiting Scholar is housed in an academic department within the College of Arts and Sciences for the semester of residency, teaching a course on an area of academic expertise. In conjunction with the office of the dean, the scholar will also lead campus conversations, meetings, and public events that pertain to topics of public policy in research areas and approached from a global perspective. Our goal is that these visiting scholars will continue the fine work Dr. Coate accomplished as Coverdell Chair and also embody the values, interests, and high standards for which Senator Coverdell tirelessly strove.