The Alex Gregory Leader in Residence program brings highly experienced leaders to Georgia College for an extended period to share their expertise in leadership with the student and faculty community. 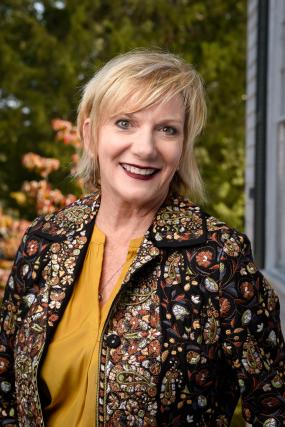 Dr. Genie Snyder Chamberlin is founder and principal of the Genieus Team and of SnyderRemarks, Inc. She has more than twenty years’ experience as an executive coach and consultant, across the United States and around the world. She is a specialist in strategic customer service, organizational change management, and executive leadership.

The Alex Gregory Leader in Residence program brings highly experienced leaders to Georgia College for an extended period to share their expertise in leadership with the student and faculty community.

The fellowship is designed to be flexible in order to allow the leader in residence to participate in a broad range of university life according to his or her own choosing. The program anticipates approximately three to four days per month on campus for classroom visits, guest teaching and facilitation, consultation with students, and other community events. The leader in residence will deliver a public presentation as part of the university’s Inspire! series.

Fellowship terms typically last for six to twelve months but can be extended through mutual agreement. The Georgia College Office of Leadership Programs will provide office space and administrative support.

The Alex Gregory Leader in Residence fellowship is named for E. Alexander Gregory, Jr., an internationally recognized trailblazer in organizational leadership, manufacturing, and international trade. Mr. Gregory joined the YKK Corporation in 1973, serving for nearly forty-five years and retiring in 2018 as chairman, chief executive officer, and president of YKK Corporation of America. In 2004, he was named the first non-Japanese Group Officer for YKK Corporation in Japan. Mr. Gregory holds two graduate degrees from Georgia College, as well as a bachelor’s degree in textile engineering from Georgia Tech. He has served on the Carter Center Board of Counselors, the Cowan-Turner Servant Leadership Program advisory board at Georgia Tech, the University of North Georgia’s Mike Cottrell College of Business advisory board, and Kennesaw State University’s Asian Studies advisory board.

In 2018, Mr. Gregory was honored by His Majesty the Emperor of Japan, conferred with the Order of the Rising Sun, Gold Rays with Rosette in the Autumn Imperial Decorations. Among numerous other honors, he received the inaugural George Busbee Award, the Japan-America Society of Georgia Mike Mansfield Award, the Foreign Minister of Japan’s Commendation, and the Leadership Character Award in the CEO/President/Managing Partner category (large company) from the Robert K. Greenleaf Center for Servant Leadership and Turknett Leadership Group. In 2017, he was named Atlanta Business Chronicle’s Most Admired CEO. He has been inducted into the Georgia College J. Whitney Bunting College of Business Hall of Fame and the Georgia Tech Academy of Distinguished Engineering Alumni.

As a leader on the Georgia College Foundation Board of Directors for more than twenty years, Mr. Gregory has presided over a period of unprecedented growth and prosperity. Through the Georgia Education Mentorship Program and other initiatives, he has mentored more than fifty college students and has demonstrated an unparalleled commitment to preparing the next generation of leaders for fulfilling lives of civic engagement and public service.