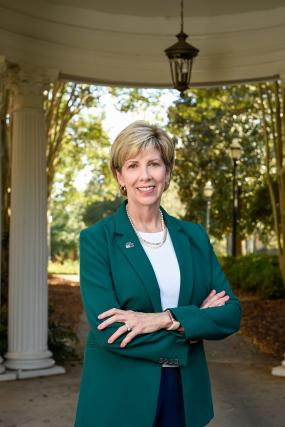 Cathy Cox became Georgia College’s 12th President on October 1st, 2021. Prior to joining Georgia College, Cox served as Dean for Mercer University School of Law from 2017 – 2021 and served as president of Young Harris College for a decade prior to that. A native of Bainbridge, Georgia, Cox’s distinguished career in law, education, politics, and journalism embodies what it means to have a “liberal arts” background.

During her term as president of Young Harris, the small private liberal arts college garnered a reputation for excellence, growing from a two-year to a four-year institution. Cox was recognized for her work in 2017 with the Young Harris College Medallion and was named an honorary alumna. In 2020, she was named Georgia’s Woman Lawyer of the Year by the Middle Georgia Chapter of the Georgia Association of Women Lawyers.

Cox is a graduate of Leadership Georgia and the recipient of Leadership Georgia’s prestigious J.W. Fanning Award for progressive leadership and service.  The National Collegiate Athletics Association appointed Cox to represent university chancellors and presidents of Division II schools across the country on the NCAA’s Academic Requirements Committee in 2022. She has served on a number of civic, philanthropic, and business organizations and boards and is a prolific thought leader, delivering scores of keynote speeches and presentations and conducting media interviews on a wide range of topics spanning her expertise in higher education, law, politics, and election law and integrity.  Cox is married to attorney Mark Dehler.

Office of the President