The Department of Mathematics of Georgia College & State University hosted the Southern Regional Algebra Conference 2022 (SRAC 2022), which was held on the campus of Georgia College & State University in Milledgeville, GA, on March 18-20, 2022. The program began on Friday, March 18, 2022 at 1 PM and ended on Sunday, March 20, 2022 at 12:30 PM.  Please visit the official SRAC conference webpage located in the sidebar at the right.

View the program for the Southern Regional Algebra Conference 2021, which was also hosted by the GCSU Mathematics Department. The conference was offered in a fully virtual format.

The Mathematics Department Honors Lunch is an event held every spring where we recognize those students who have received various departmental awards and honors. The 2023 Honors Lunch details will be posted when date is scheduled in the spring of 2023. 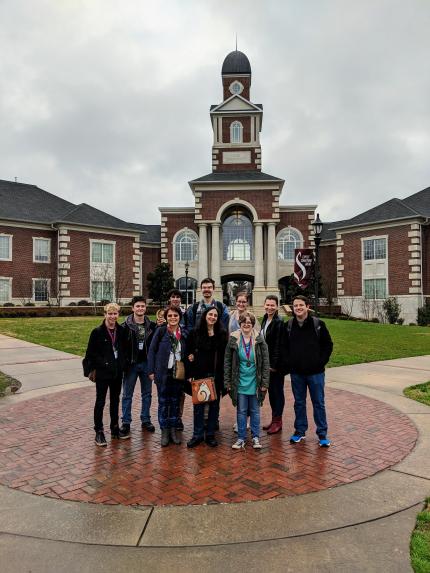 Everyone had a great time at the conference and learned a lot.  The students enjoyed competing in Math Jeopardy.  They won the first and second rounds of the tournament by a large margin, which consisted of various types of problems including calculus and mathematical vocabulary.  They came in third place in the final round and brought back a trophy.

In addition to the Math Jeopardy competition, Cain Gantt gave a presentation about his capstone project “The Fourier Transform and signal processing.” Three of the faculty members talked about their research projects at the sectional meeting. The presentations were “Engaging students in reflective thinking” by Dr. Chiorescu, “Statistics Reimagined: The Courage to Make Substantial Changes” by Dr. Samples and “The fractal dimension of the Rudin-Shapiro Function” by Dr. Yue, respectively. 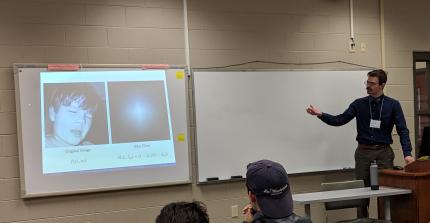 Moreover, they attended a variety of talks.  Laurel says, “I really enjoyed the talks at the conference, specifically the ones on education and `Tales of Success from Mathematical Malpractice,’ which talked about the failures of great mathematicians.”  Josh says, “There was a lot of graph theory there which is what I do for research so it was good to see what other people are doing. There were also two presentations on hypergraphs, which I didn't know about and I'm really excited to start looking into them.”

The students also attended the graduate school fair.  Stephen says, “The grad fair was actually my highlight. I had the opportunity to talk to many grad students about their experience and got many pointers on what to look for in a school and how to find what I'm passionate about in the field of mathematics.”

Overall, it was a very enriching and productive experience.  The students are thankful to have had the opportunity to attend.

On March 10 and 11, 2017, several Georgia College students and faculty members attended the Mathematical Association of America's Southeastern Section Meeting at Mercer University. Georgia College students Cason Butler, Cain Gantt, Spencer Shortt, and Cuyler Warnock competed in the Math Jeopardy Competition. The team trained for the tournament weekly starting in the fall of 2016, coached by Dr. Hong Yue and Dr. Rachel Epstein of the math department. They practiced by discussing questions from previous Math Jeopardy tournaments as well as by studying various mathematical topics, such as combinatorics and graph theory. 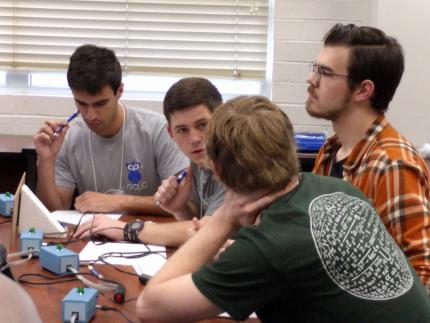 The questions in this year's Math Jeopardy competition ranged from mathematical rhymes and anagrams to complex computational questions. In the first round, the Georgia College team dominated in the challenging category "Polar Plots," where an equation was given in polar coordinates and the students had to describe the graph of the equation without the use of a calculator. They came in second place in the first round, but their high score allowed them to move on to the semi-finals as a wild card team. They won the semi-finals by a large margin, correctly calculating the square root of 20 to the nearest hundredth in Final Jeopardy.

The final round of Math Jeopardy was in an auditorium with hundreds of spectators. The team from Austin Peay State University in Tennessee was leading when the Georgia College team landed on the Daily Double and made the bold move of wagering everything. The Daily Double question asked to calculate the sum of the number of faces, edges and vertices of an icosahedron. When the team's answer was confirmed to be correct, the audience erupted in applause.  However, the Austin Peay team also gave an impressive performance and won the game with a score of 8801 to Georgia College's 8800. Georgia College team members were awarded silver medals and a trophy. 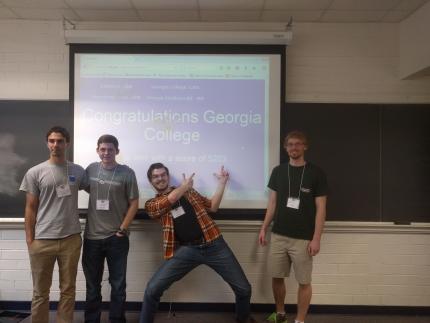 Participating in Math Jeopardy was a fun way for the Georgia College students to learn about a lot of mathematical topics that they hadn't seen before," said Dr. Rachel Epstein, assistant professor, mathematics. "Solving difficult problems during the competition without being told what techniques to use helped strengthen their problem solving skills, teamwork skills and confidence in their abilities." 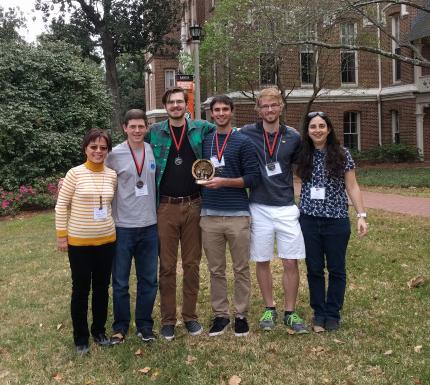 Additionally, Georgia College student Kelsey Windham, presented her research in the Undergraduate Poster Session. Kelsey presented her Senior Capstone Project, "Exploring Symmetries with Complex-Valued Functions." About presenting, Kelsey said, "It was very exciting to have the opportunity to share my hard work with other mathematicians who were genuinely interested in my research." 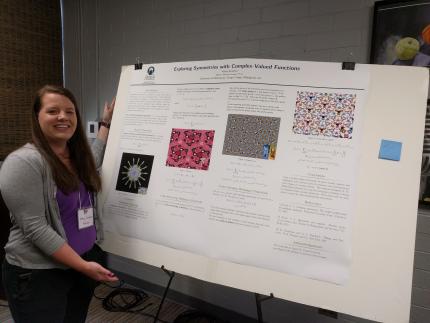 All of the students enjoyed attending the various activities at the conference including the undergraduate talks, invited lectures, and the graduate fair. Overall, the conference was an excellent experience where the students from Georgia College were able to learn about various topics in the field of mathematics as well as compete in Jeopardy and give presentations.