A Good MFA Program is Hard to Find

A good MFA program is hard to find, but we believe the MFA Program at Georgia College and State University in Milledgeville, Georgia offers unique opportunities for MFA students dedicated to the craft and purpose of creative writing. GCSU’s famous alumna, Flannery O’Connor, lived in Milledgeville on her farm, Andalusia, and of our beautiful, Southern town, she wrote "When in Rome, do as you done in Milledgeville." Our MFA students certainly get a lot done in their three years in Milledgeville.

What makes us unique? We take pride in the fact that the MFA Program at Georgia College is a fully-funded, full-residency 3-year MFA program. All students admitted to our MFA program receive a Graduate Assistantship for all 3 years that includes a stipend and tuition remission. Self-funded students are accepted in special circumstances. We offer everything you could find at flagship state universities, but because we are part of a small, public Liberal Arts university, our students are immediately welcomed into a close-knit, creative community. We sponsor a Visiting Writers series, bringing nationally-renowned writers to campus each semester, as well as a graduate student reading series. Our award-winning faculty work closely with students not only as workshop teachers, but as professional mentors.

The MFA Program offers workshops in fiction, creative nonfiction, and poetry, and because we believe in expanding creative possibility and passions for our students, we require students to take cross-genre workshops. Students may write their thesis in fiction, poetry or creative nonfiction. In addition to workshops, students take creative writing seminars in Poetry & Poetics or Prose Forms, pedagogy classes on the teaching of writing, and courses on literature and special topics.

Additionally, we offer courses in journal design and editing, so students get hand-on publishing and graphic design experience. Students are able to put their practical skills to creative and purposeful good use while serving as members of the editorial staff of Arts & Letters, our national literary journal, and one of the premier journals of the Southeast.

We are fully-funded: all students receive full tuition remission as well as a Graduate Assistantship. As part of this assistantship, students gain real-world teaching experience, and work at our Writing Center as tutors, teach undergraduate Composition, and teach in our Early College Program which is modeled on the Writers in the Schools Program. This real world teaching experience is essential for those students who hope to continue with teaching careers and/or community service careers.  We also participate in the Peace Corps Paul D. Coverdell Fellows Program which offers assistantships to Peace Corps volunteers.

Finally, the Arts & Letters Journal Editing Fellowship is open to applicants with at least one year of experience in journal publishing and/or editing, desktop publishing and design (preferably with InDesign), and/or marketing and promotion (including social media). The Fellowship offers recipients the opportunity to further develop both editorial and managerial skills over their three years in the MFA program, working closely with Arts & Letters’ Editor and Art Director (for more information about this specific fellowship, refer information under Assistantships).

Faculty and graduate students alike all practice what we preach and teach at GCSU!

Our 42-hour program is designed to be a three-year program (although other options may be possible for those students that already have an MA Degree) and most students follow a plan that emphasizes course work in the first year and thesis work in the second and third years.

We welcome you to learn more about our admission application process and opportunities for graduate assistantships and other financial aid.

Check out the new design of the Arts & Letters website!

We now have a dynamic platform that is more efficient and responsive, and we’ve packaged it in a prettier and more user-friendly design. We are also now connected across a number of social networks, including Facebook, Twitter, Tumblr, and Google+, so that our readers can keep up on Arts & Letters news, reading periods, information on upcoming issues, and prizes.

Graduate Assistantships in the Writing Center 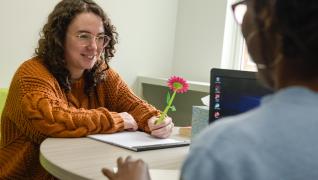